Millibelle is a Quest in Hollow Knight. Quests can provide rewards from items, unlocking Trophies/Achievements, and uncovering more information to the lore. Quests can only be activated by speaking to NPCs. 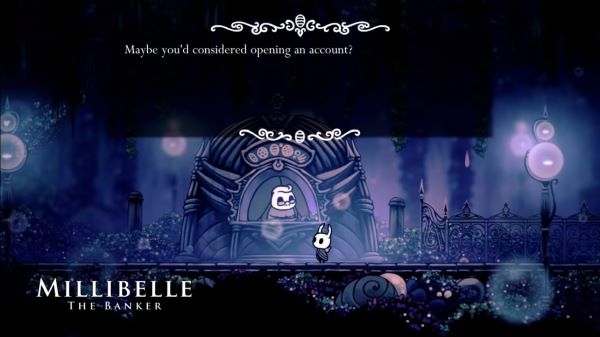 To kick things off, head to Millibelle the Banker's stand which is located in Fog Canyon near the Queen's Station. Once you speak to her, she will offer her services of safekeeping your Geo in her "vault" for a starting fee of

100. The maximum amount The Knight can deposit is

4500, however, something special will happen if you deposit an amount more than

2500, rest at any bench or use fast travel, and return to her stand - you will be surprised that Millibelle has abandoned her stand and will reveal that the stand is fake and made out of cardboard if you strike it a couple of times with The Nail.

Now, it may seem that you have wasted such a huge amount of money, but you will be able to gain whatever amount you have deposited with a large interest rate by tracking Millibelle down. Simply head over to the Pleasure House in the City of Tears near the King's Station where you can find Millibelle relaxing by the hot spring - just make sure you have a Simple Key to unlock the door to Pleasure House. Unlock the door and take the lift all the way to the top to reach the hot spring. 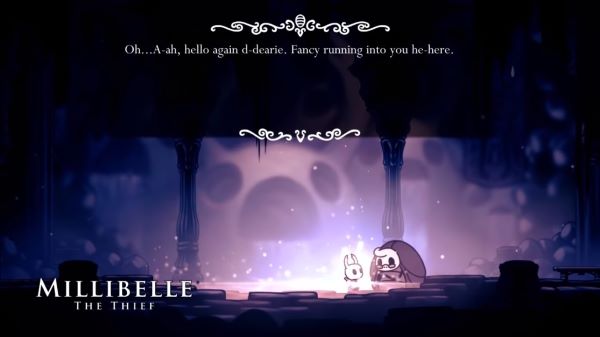 Once you've caught up with Millibelle, speak to her and you'll notice her name will change into Millibelle the Thief - anxious and startled, she will then try to explain what happened to all of your Geo and the reason why she had to leave. After you've listened to her plea, you will now have the opportunity to recover your Geo by striking her shell with the Nail, she will immediately hide in her shell like a turtle, and as you continuously strike her shell, countless Geo will start to drop.

Hitting her shell won't inflict any damage or kill her but will just bounce her around the area - Geo will stop falling off from her shell which implies that all of the Geo you've deposited as well as more have completely fallen out of her shell, with this you can leave the area or head back to the hot spring and speak to her where she mentions that "she has nothing left and suggest for you to be on your way". You may strike her shell and bounce her around the area without inflicting any damage if you simply would like to play around with her.